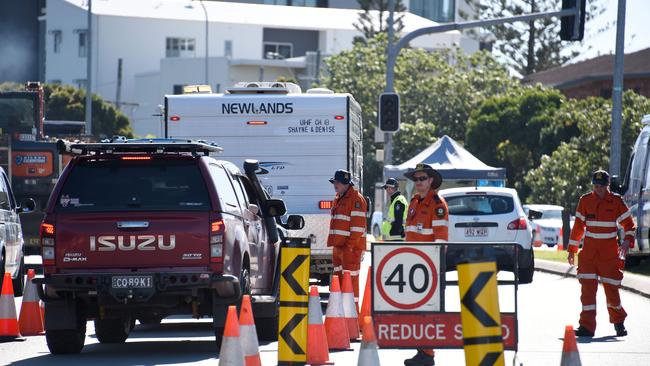 After days of gridlock traffic at the Queensland border, wait times have been reduced to under 45 minutes thanks to changes in the border declaration process.

It comes as police consider implementing push notifications to remind motorists to update their border passes before they expire.

A Queensland Police Services spokesman confirmed text or email reminders were on the table.

“It is encouraging to see the wait and travel times reducing,” he said on Monday morning.

“There has been a good update in the border declarations processed and people displaying them properly.

Mr Wheeler said police and the Government would continue to look for efficiencies to further streamline the border process.

“We want to get people into Queensland as quickly and as seamlessly as possible but keep COVID out of the state,” he said.

A QPS spokesman confirmed that since July 10, 60,000 vehicles had been processed through the state’s border control points.

Of those, 836 people have been denied entry to the state.

Three fines for declaring untrue information on border declaration passes have been issued since Friday, bringing the total amount of fines since Queensland reopened its border to 13.

About 43,000 passengers have arrived at the state’s airports in the last 10 days with 31 turned around.

It comes as the push to move the border temporarily south heats up after Queensland Premier Annastacia Palaszczuk wrote a letter to her New South Wales counterpart to make life easier for struggling Tweed/Coolangatta border residents.

In response, Gladys Berejiklian said an alternative was to move the border north, temporarily encompassing the Gold Coast as part of New South Wales.

“We’ve continually adapted and changed as conditions have changed … that would be the same,” Mr Wheeler said.

“If we’re advised that we need to operate from a different area, we’re absolutely in a position to do that.” Survivor: God will judge those who grabbed bags